by Lev Ponomarev, head of the NGO For human rights and a member of the Moscow Helsinki Group

I am now writing a second article about Konstantin Ponomarev (the first one is here).  I am not doing this because he is my namesake but because urgent public intervention is essential in his case.

On 9th December 2020 Solechnogorsk city court sentenced Konstantin Ponomarev to ten years and two months in prison for attempted fraud (Article 30, Part 3, in conjunction with Article 159, Part 4, of the Russian Criminal Code). Actually, the attempted fraud consisted of filing a lawsuit for the return of his diesel generators and the recovery of rental payments for their use in Crimea from 2014 to 2020. Konstantin Ponomarev is currently held in detention centre No. 2 of the Federal Penitentiary Service in the Moscow region.

It is not exactly news to anyone that the level of the creative talents of the judges of general jurisdiction leave much to be desired: judgments nearly always contain compilations of excerpts from the text of the prosecution’s case, and even a complete copy of the indictment. This problem has been under discussion for years. Konstantin Ponomarev and his lawyer, Anna Stavitskaya, decided to approach it in a methodical way and passed the text of the verdict and of the final indictment to Dissernet, a Free Online Community that runs a project aimed at examining the level of plagiarism in academic dissertations. They earned themselves  high public standing  by ruining the reputation of a wide range of crooks, forgers and liars.

Their monitoring showed that the judge who delivered the verdict in the case of Konstantin Ponomarev at Solnechnogorsk city court, Stanislav Chepik, duplicated word for word 198 pages of the indictment of 204 pages. Here’s a table with these unexpected (though, expected) results: 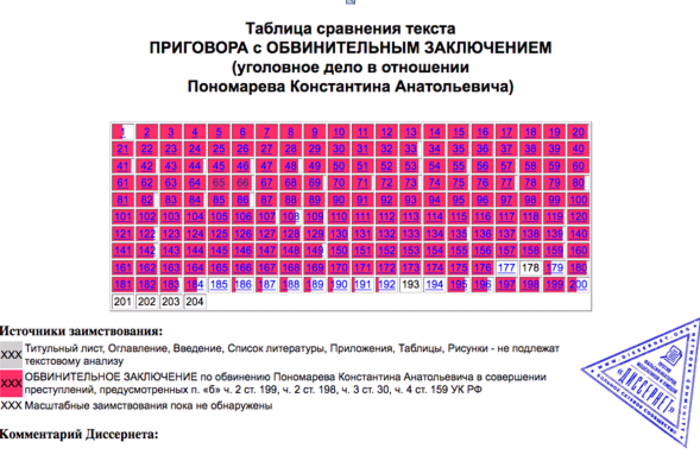 At the present time, Moscow Regional Court has returned the case to the Solnechnogorsk city court on the grounds that Ponomarev was not sufficiently acquainted with the materials of the trial in the court of first instance. Now this court has given him the opportunity to familiarise himself with all 75 volumes of the case. However, he has been granted only six working days in which to read them. Ponomarev must view the written materials at the same time as listening to the audio recording of the court’s minutes, and this is with a blood pressure 210/120. If you want to exercise your procedural rights, please do so, but only under torture. Otherwise, the current Russian system will not work.

According to the information received from his lawyer, Anna Stavitskaya, the judge has threatened to transfer the case back to Moscow Regional Court on 15th February. I sincerely hope that the administration of the Solnechnogorsk city court will read my article and still fulfill its duty to give Ponomarev the opportunity to familiarise himself with the case. Ponomarev has declared a hunger strike to enforce this demand.

We will monitor the fate of the judge, who spent more than one day imitating judicial procedures in the trial of Konstantin Ponomarev and then handed down a judgment that contained 97% of the text of the indictment. It is obvious to me that the results of the assessment by Dissernet completely discredit the work of the judge who handed down this sentence. I am waiting for the reaction of the public and of the Higher Qualification Board of Judges.

Aleksandr Podrabinek: Separating the grain from the chaff. Why there should be an ‘anti-sanctions’ list as well as a sanctions list

This week the ECtHR handed down 14 rulings with regard to Russia.

Aleksandr Podrabinek: The police station had gone into ‘lock down’ immediately they found out a lawyer and a journalist had arrived.

News of the Day

News of the Week

Quote for the Week

Person of the Week

Legal Case of the Week

CSO of the Week

Law of the Week

ECtHR Ruling of the Week